Brent Mathieson from Lefroy Valley NZ received multiple nominations for the 2021 Industry Service award – the first time one has been awarded to anyone from the vegetable seed industry!

With the conference focused on Resilience and Recovery, we know Brent has certainly shown resilience over his more than 40 years of service to the horticultural community!  Now transitioning to retirement Brent can look back at his career and feel a sense of achievement having worked alongside many, many growers through the regular ups and downs of growing over the years, and aided in the recovery of growers as they struggle to get back to ‘normal’.

Photo: Brent (C) receiving his award from (L) Barry O’Neil — Chairman of Board of Directors, HortNZ and Damien O’Connor — Minister of Agriculture.

Starting in horticulture in the late 70’s based in the South Island, Brent travelled the country calling on growers, firstly while working for Dalgety, then Yates, and after relocating to Pukekohe in the early 80’s. In 1992 Brent bought into Lefroy Valley and became the driving force behind the company’s growth for the next 20 years.

Well known to many growers all over NZ from his wide sales area and broad knowledge, Brent has demonstrated his passion for all things related to vegetable growing, and like growers, was not bound by the 9-5 of Monday to Friday but always ready to answer the phone and visit no matter what day or time it was – if the grower was in the paddock so was Brent!

A consistent theme from the nominators was that Brent was always available, often seen hand planting trials to get them in the ground no matter the weather, and his passion to get the best outcome for growers and their crops has been appreciated.

Enjoy your retirement Brent. I’m sure you will still be seen out in the fields checking on crops! 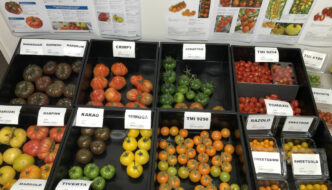 In July Lefroy Valley held an inaugural Tomato Showcase. With the discovery of Pepino Mosaic virus in New Zealand, the opportunity to visit … END_OF_DOCUMENT_TOKEN_TO_BE_REPLACED